As goes January, so goes the year. Not so fast.

The stock market is a fascinating place. It’s where capital meets ideas and risk says hello to reward. It’s also where millions of investors decide the value of thousands of publicly traded companies, and in so doing not only set the price for individual securities and the overall market but offer us a window into the outlook for the real economy. Of all leading indicators, the market is probably the most closely followed as risk assets tend to lead the real economy – consider the market bottomed in March ‘09 while the economy didn’t exit the recession until June ‘09. However, our focus in this weekly wire isn’t on the market as a leading indicator for the economy, but on the market as a leading indicator for the market. Which brings us to one of Wall Street’s most popular adages, “As goes January, so goes the year.”

With “As goes January” the idea is how the market performs in January is how the market will perform for the year (e.g. if the market is up in January, it will be up for the year). As to why January returns might prove predictive (if at all) of full-year returns, the most accepted theory seems to do with momentum – if investors see the market get off to a strong start, they are more likely to invest incremental capital in the market, pushing prices still higher. The inverse holds true for a weak January – selling begets selling and lower equity prices. Since 1970, using the S&P 500 Index (S&P 500) to gauge January and full-year performance, the adage has a hit rate of about 70%. However, things get a bit muddied as you parse the data. Since 1970, a down January has been followed by a down year only 38% of the time, which makes sense in that markets tend to rise more than fall on an annual basis. Then we have January 2020, when things get really muddied as the market finished the month flat with the conundrum being the market  pretty much never finishes a year flat. The S&P 500 was off 0.04% for January, but from where we sit that move qualifies as no move at all. The closest we have come to an unchanged S&P 500 since 1957 was in 1960, when the index returned 0.47%. 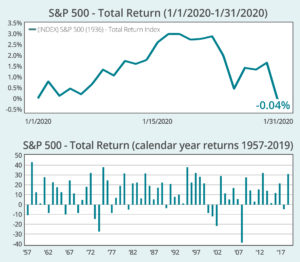 So, what to make of “As goes January” this year? The same thing we make of most, or all, Wall Street adages every year – they can be fun, even fascinating windows into Wall Street, but should never be the basis for allocating capital. On that front, we always come back to economic fundamentals, fiscal policy, and monetary policy. That written, there is one bit of market history we are willing to hang our hat on and that is over the long-term markets are biased higher. Consider that the S&P 500 was positive 49 of the 62 years between 1957 and 2019, and over that timeframe provided investors an average annual
return of 11.6%.