On Sunday, February 2, 100 million Americans watched Patrick Mahomes lead the Kansas City Chiefs to a stunning fourth-quarter comeback victory over the San Francisco 49ers in Super Bowl LIV, earning MVP honors for himself and delivering the franchise’s first world championship in 50 years. It was a great  game (our sympathies to any 49ers’ fans reading this post)!

Now, when one considers the hype, the half time show, the commercials, the viewership, the number of folks who call in sick the day after the game, and the celebrity attendees its clear the Super Bowl is much more than a football game and even much more than our nation’s most popular sporting event – it is a cultural phenomenon. For investors, this year’s Super Bowl was even more than that; it was a very timely – and very welcomed – distraction. Consider that in January we had to contend with the coronavirus, a 600+ point drop in the Dow Jones Industrial Average, the US and Iran military conflict, the S&P 500 Index giving back all of its 4% intra-month gains, and our already difficult and challenged political and cultural discourse becoming even more difficult and challenged as impeachment moved forward and the 2020 campaign cycle kicked into gear. Beyond taking our minds off of a very tough January, the Super Bowl is of interest to many investors as the basis for one of the more novel market forecasting tools –The Super Bowl Indicator (SBI). 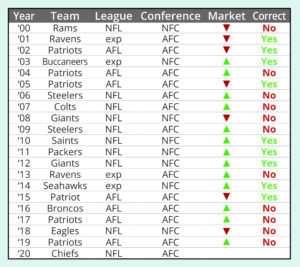 Identified in the 1970s, the Super Bowl Indicator posits that when an NFC team – or a team that was in the NFL prior to the merger of the NFL and AFL – wins the big game, the market will be up for the year, but when a team from the AFC wins, the market will be down for the year. Over the past 50+ years, the SBI has been right about 75% of the time (though its track record over the past 20 years is much less impressive). Of course, correlation doesn’t mean causation, which is a fancy way of saying that while the SBI is an entertaining, pop culture-based market forecasting tool, it has no forecasting power whatsoever. But, it’s fun to talk about once a year, and like the Super Bowl, it’s a welcome distraction after a very bumpy January. As always, with the market and the outlook for risk assets, our focus should be on monetary policy, fiscal policy, and fundamentals; and those factors keep us optimistic as we move further into 2020.