The US, Iran, oil, and the economy…Where do we go from here?

We have been asked often what we think of US/Iranian hostilities, including how that dynamic might develop and how it might impact the economy. Truth be told, an investment professional should be  reluctant to opine on any budding global conflict since discerning the direction it will take is notoriously  difficult and it is a bit unseemly to speak of economic growth and financial assets while our troops are in harm’s way.

With that said, we are in the business of assessing potential risk and return and allocating our client’s capital accordingly, and developments in the Middle East have markets on edge. As of this writing, the US has targeted Iranian Major General Qassem Soleimani and Iran has launched missiles at military bases in Iraq housing US military personnel; fortunately, there have been no reported casualties. It appears both countries are seeking a de-escalation of hostilities, and while we do expect a cooling off, we still see two primary risks tied to the conflict. The first being China – which has a robust trading relationship with Iran – responding to recent US activity by abandoning the Phase 1 trade agreement. The second being a spike in the price of oil, a development that could come about should Iran seek to disrupt oil shipments through the Strait of Hormuz (about 30% of the world’s seaborne-traded oil products travel through the  Strait). It bears noting that every US recession of the past 30 years was preceded by a jump in the price of oil. Fortunately, for now, neither scenario is likely; as a delegation from China remains scheduled to  visit the US on January 15th for an expected signing of the Phase 1 agreement, while Iran has not  directed its military assets at the Strait. 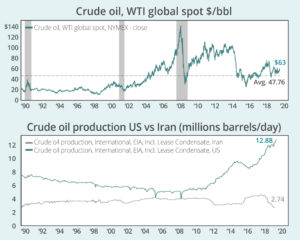 Beyond those developments, massive gains in US oil production in the past 10 years has radically altered our country’s economic relationship with the commodity; consider that the US is the world’s largest  producer – and also a net exporter – of petroleum. Whereas in the past, a jump in the price of oil would  be an unmitigated negative for our economy, the dynamic is much more nuanced today, with price  inflation accruing to the benefit of our now substantial domestic oil and gas industry. While we are more indifferent to the price of oil today, any meaningful appreciation is unlikely as world markets remain well supplied, largely due to US production. A final point about the global energy industry: the US produces  about 12.9 million barrels of oil a day, nearly five times Iran’s daily production. Despite the heightened geopolitical risk, we remain optimistic on the economy and markets as we move into 2020.