The struggle of trying to time the market is a much-discussed topic. The overall conclusion of research is to take on this task at your peril and, given the compounding of returns over time, the best time to invest is sooner rather than later.  In short, the easiest way to win the investment game over the long-run is to make sure you are invested in the game. More nuanced market timing, that at least avoids the pitfall of failing to invest, considers not when but rather where to invest. Among equity, this can take many broad forms including International vs. Domestic, Small Cap vs. Large Cap, or Growth vs. Value investing. It is this last example I will attempt to skim the surface here.

It both makes sense to pay as little as possible for stock based on current earnings and, all else being equal, pay extra based on present earnings that are expected to grow faster. In other words, both growth and value styles of investing make sense and markets attempt to balance these two forces. This, however, does not mean growth and value stocks deliver the same returns at the same time.

Over the past 40 years from January 1, 1980 to December 31, 2019, the average quarterly return of the Russell 1000 Growth and Russell 1000 Value are virtually the same (3.14% vs. 3.12%) with Russell 1000 Growth outperforming growth 85 of these 160 quarters (about 53% of the time.) This has been a very close race and the winner, Growth, has done so with a greater range of quarterly performance outcomes (a spread of 50.17% vs 40.42%) consistent with the more risk more return bargain of the market. However, over shorter periods of a single decade, there are clear style winners.

The 1980s belonged to value, the 1990s to growth, the 2000s to value, and the 2010s to growth. In the long run, economics should drive stock returns, but market participants add complexity as they try to position themselves ahead of where the economy and other market participants are headed. Hence the struggle of trying to time the market. Still, is history suggesting that the regime will shift back to value leadership in the current decade??

Watching waves coming in on the beach, it is hard to tell based on a few waves whether the tide is coming in and out, but after a while, you find you must move your beach chair. Similarly, a few performance period waves are inadequate to call a change in the favored investment style. One way to watch this tide is looking at how much extra investors pay for the higher growth of earnings of the Russell 1000 Growth Index relative to the lower growth of earning of the Russell 1000 Value Index. This can be calculated by the ratio of Price to Earnings Ratio (PE Ratio).

Looking at historical data of the Russell 1000 Growth P/E Ratio divided by the Russell 1000 Value P/E Ratio from January 2000 to December 2019, the tide can be seen. January 2000 the Russell 1000 Growth Index had a P/E Ratio 37.3 versus a Russell 1000 Value Index P/E Ratio of 15.5, equaling a ratio of 2.41. In other words, based on the price an investor paid in terms of current earning for a value company, they paid an extra 141% for a growth company. An investor should pay extra in terms of current earnings for a company that is growing, but this seemed excessive. By the end of the 2000s, value made a relative comeback and the ratio had changed to 15.2 versus 13.2, equaling a ratio of 1.15. So now an investor paid only a 15% premium for a growth company. For an extra 15 cents per earnings dollar, yes I would like more growth please! Of course, we know how the 2010s went with growth making a comeback after starting the decade as a bargain. 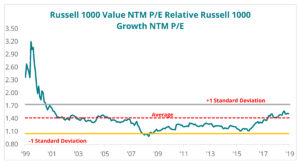 So where do we stand today? At the end of December 2019, the Russell 1000 Growth Index had a P/E Ratio of 23.1 versus a Russell 1000 Value Index P/E Ratio of 15.2, equaling a ratio of 1.52. On average over the past 20 years, the ratio is 1.39. So, while growth is not as inflated as it was at the start of 2000, it is more expensive than average. It is also important to note that growth became even more expensive until the middle of 2000. Accordingly, while no immediate call of action is required, it seems prudent after this decade of growth style dominance to be aware of any growth overweights that are now present in portfolios to avoid getting wet when we find the tide has changed.